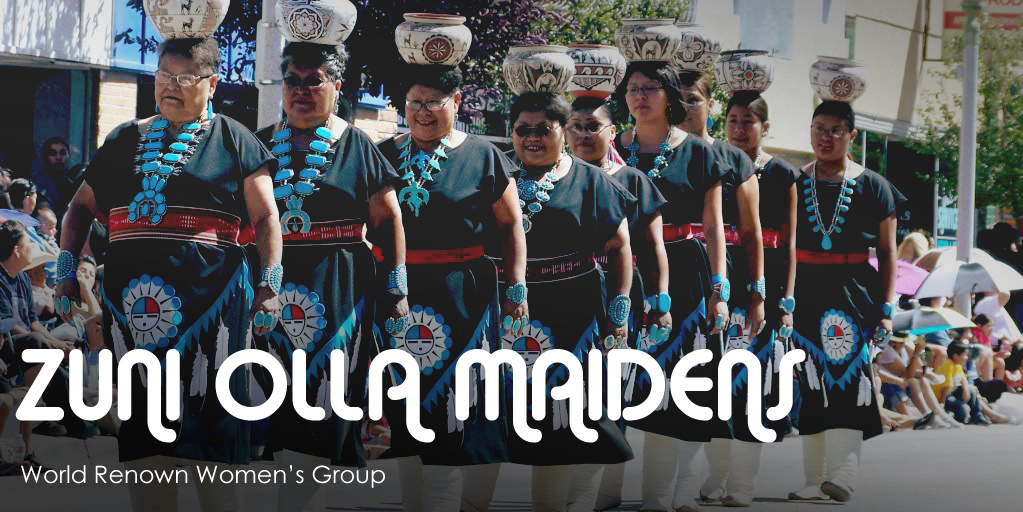 The Zuni Olla Maidens are a group of women who travel throughout the U.S. and Canada promoting the beauty and culture of the women of Zuni. They have been showcased at the 1995 Festival of American Folk Life in Washington, D.C., The Museum of Women in the Arts (also in Washington), The Banff Centre for the Arts in Banff, Canada and the Ganandogan Native American Music Festival in Rochester, New York. They have performed for many years at the Inter-Tribal Indian Ceremonial in Gallup, New Mexico. They have also been featured in calendars and magazines.

They have been featured in a documentary along with these women performing artists: Rita Coolidge and Walela, Ulali and the Tuscarora Women Singers. The documentary is called, “Singing Their Songs.” It is featured a many colleges as part of their Native American studies.

The Olla Maidens also perform at many functions which promote indigenous people as performing artists. They are very active in community events and participate in cultural fairs and festivals. They are acknowledged for their skill in dancing to the beat of a drum while balancing painted pottery jars on their head. They sing songs in their Native language (Zuni) while accompanying themselves with a drum, rattle and a wooden notched box which emits the sound of a chorus of frogs when stroked with a wooden stick.

This group under the direction of their leader, Cornelia Bowannie, is unique in that they are all related through blood ties. Cornelia, the matriarch, has daughters, an aunt and granddaughters who participate in the dance group. The group has been performing together for many years.