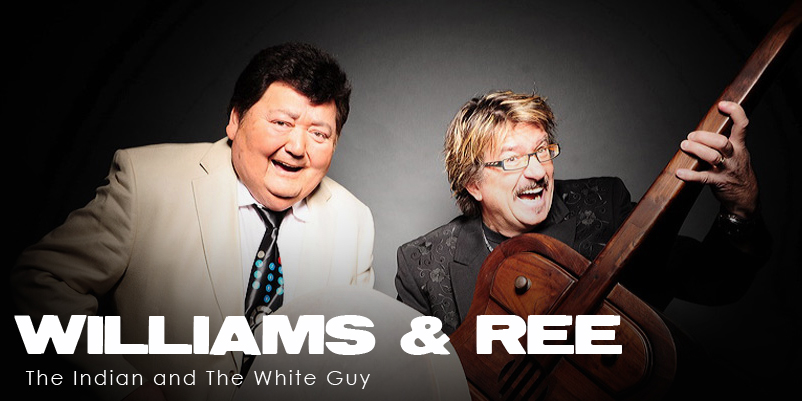 Williams and Ree, aka The Indian and The White Guy, are one of the longest running and most successful comedy/music teams in history. Politically incorrect and proud of it, the duo reigns supreme as the quintessential antidote to staid and stagnant entertainment choices.

Bruce Williams and Terry Ree met in the Black Hills of South Dakota and formed a union stronger than most marriages. They began touring the country primarily as a musical act but soon incorporated their unique brand of humor into the show. The pair moved to Nashville, Tennessee and allied themselves with the burgeoning Country Music scene. They have performed with the likes of Garth Brooks, The Oak Ridge Boys and Tim McGraw, and have made many television appearances on The Nashville Network.

Their comedy albums include “The Best of Williams and Ree”, “Taking Reservations” and “Way Up Norsk”. They also made two independent films in South Dakota, “Williams and Ree, The Movie” and “Totem Ree-Call”.

They are the regular hosts of the Craven Country Jamboree in Craven, Saskatchewan and Country Thunder festivals in Wisconsin and Arizona. They are also regulars at the Norsk Hostfest in Minot, ND.

Whether they are performing at Indian casinos, fairs, festivals and theatres or headlining their own sold out shows throughout the United States and Canada, Williams and Ree remain at the top of their game, bringing joy and laughter to generations of inspired, frenetic fans.