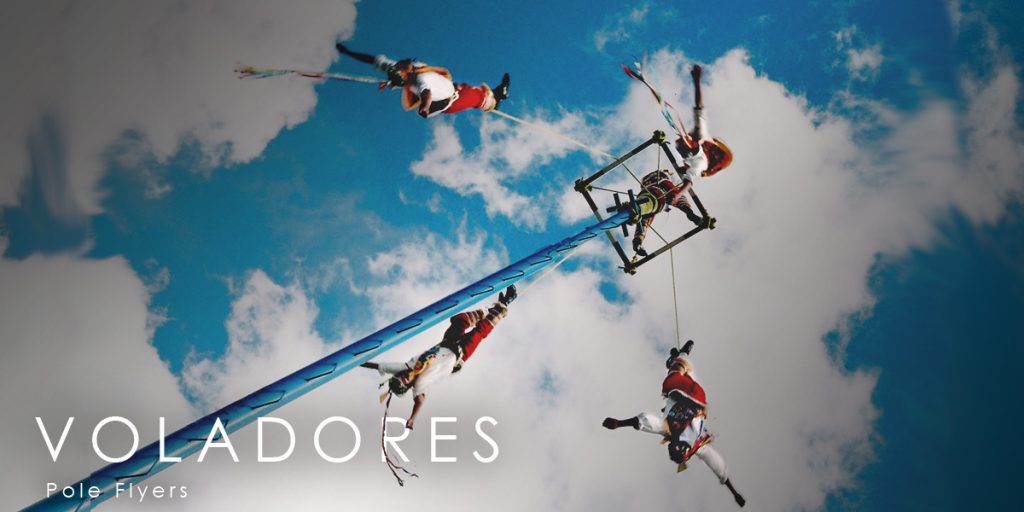 The Voladores from Papantla, Vera Cruz, Mexico represent 57 tribes in Mexico. This sacred ceremony is dedicated to the sun and is similar in intent to the sun dance of the Plains Indians of the United States.

The Totonac dress for this ritual consists of a red pants with a white shirt, a cloth across the chest and a cap. The pants, hat and chest cloth are heavily embroidered and otherwise decorated. The cloth across the chest symbolized blood. The hat is adorned with flowers for fertility, mirrors represent the sun and from the top stream multi-colored ribbons representing the rainbow. These costumes are made by the Voladores themselves.

The pole is a connection point between the sky and the earth and the underworld with the surface world, and it is considered to be the fifth cardinal direction of the earth. The pole and the dancers are then purified with alcohol sprinkled in the form of a cross and tobacco smoke. The ceremony begins with a dance and song. After this, the five begin to climb the pole until near the end of the ceremony. The captain stands on a small platform at the top of the pole. From this capstan is suspended a square frame on which the other four Voladores sit. While these four wind the ropes around the pole and tie themselves to the ends, the captain plays the flute and drum acknowledging the four cardinal directions, beginning with the east because it is believed life came from this direction. The four ropes are each wound thirteen times, which times four is fifty two, the number of years in a Mesoamerican solar cycle. The captain then bends fully backwards to acknowledge the sun, playing all the while.

The four Voladores represent the four cardinal directions as well as the four elements: earth, air, fire and water. The captain represents the fifth sun. The four Voladores seated on the square frame face the captain and at the appropriate moment fall backwards to descend to the ground suspended by the wound ropes. As the ropes unwind, the Voladores spin, creating a moving pyramid shape. As the Voladores descend the captain plays and dances on the narrow platform. Traditionally, after the descent, there is another dance.