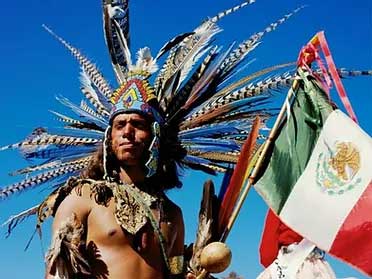 The Tezcatlipoca Aztec Dancers from Mexico City are led by Apolinar Simbron. The Aztec Indians inhabited the plains of Mexico from the 11th century to the beginning of the 16th century. The Aztecs spoke a language called Nahuatl, which is still used by over a million Mexicans today, although Spanish is their official language.

In 1324, the Aztecs settled in an island village called Tenochtitlan, which later grew into a large town. Mexico City is built on the same spot.

In 1519, Hernando Cortez, a Spanish explorer landed in Mexico, marched to Tenochtitlan and took the Aztec King Montezuma prisoner. Two years later, he finally defeated the Aztecs and destroyed their city.

Over the years, the Aztecs had constructed many beautiful palaces and pyramid-shaped temples for the worship of their numerous gods. Fortunately, not everything belonging to the Aztec civilization has disappeared. There are many well preserved architectural remains-sacrificial platforms, temples and a remarkable calendar stone. Bless the ground and the four cardinal points and ask permission from our ancestors and our Great Spirit to be able to do our dances. Dance of the Shipitotec. This particular dance dedicated to the spring season when Mother Earth changes and begins a new life so the Aztecs can start a new cycle of planting their corn and fruits.

Guadalajara – This dance is dedicated to one of the cities in Mexico. Guadalajara is located in the state of Jalisco on the Pacific Coast.

Dance of Itzacuautll or Dance of the White Eagle – According to Aztec mythology, when a warrior dies in combat, the eagle descends and takes the fallen warriors’ spirit uyp to our creator.

La Danza Del Sol or Sun Dance – The Sun dance is dedicated to our sun, without our Father Sun there would not be any life on our planet.

Dance of the Chachayoti – This dance is dedicated to the seeds that are worn on the ankles. These seeds help the Aztecs keep the rhythm of the drum.