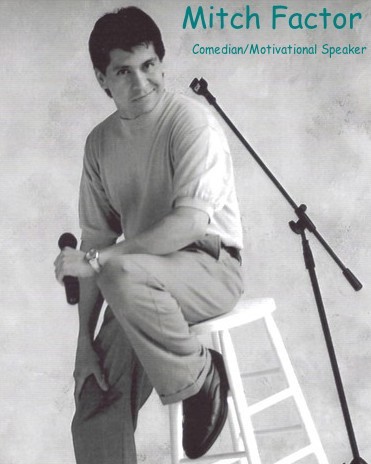 Mitch Factor is a Seminole and Menominee Indian who was born the youngest of ten and raised in Oklahoma by a very loving and strong family.

Mitch had the gift of humor at an early age and was able to make any situation humorous when given the chance. Mitch began his stand-up comedy journey at “Bricktown’s Comedy Warehouse” and “Jokers Comedy Club” in Oklahoma City. With three comedy tours under his belt, Mitch reminds us that it is okay to laugh at the harsh realities of life. His comedy covers subjects such as family, work, children, Native American way of life and simply being human. His comedy also includes original characters such as “Joseph From Up Nort” who sings an original blues song titled “Fry Bread Momma, Why Did You Sit On my Dog and Kill Him? and “Garage Sale Babe”. Mitch performs comedy simply because he loves to see people laugh together.

In 1992 he was a stunt double for Wes Studi in the 20th Century Fox film, “Last of the Mohicans”. This opened the door for a television miniseries, TNT’s “Broken Chain”.

Mitch Factor has been involved in Tribal Head Start for over 25 years. Since receiving his degree and attending countless early childhood development trainings, Mitch is now a keynote speaker and presenter for Tribal Head Start programs and organizations across Indian Country.

He has presented for NISHDA (National Indian Head Start Directors Association) national and regional conferences and has trained Head Start Programs across the United States, including Alaska and Canada.

Mitch specializes in parent and family involvement, male involvement, and staff working as a collective unit to benefit the child and family. He is writing a series of children’s books based on his Native American daughter “Gabby”. Mitch currently works for a model Head Start Program in the state of Washington as a lead teacher.