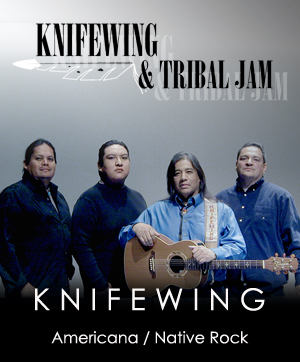 Co-starred in motion picture “Jonathan of the Bears”

55 million TV viewers witnessed the birth of a new sound in music when this Native American band was featured on National television. Their music captures the essence of the Native American culture to take you to another world.

Knifewing’s music blends contemporary sounds with the haunting melodies and tones of Native American chants. The traditional Buffalo, Eagle, grass and Fancy dances are choreographed into the musical performance to tell the stories of the dances and the songs.

His music has been scored into motion pictures and numerous documentaries. The Department of Tourism for the State of New Mexico commissioned his music to promote tourism in the Land of Enchantment.

Knifewing and Tribal Jam have been highlighted in major events acros the country. Their music is “The Sound of the Future and the Spirit of the Past.”