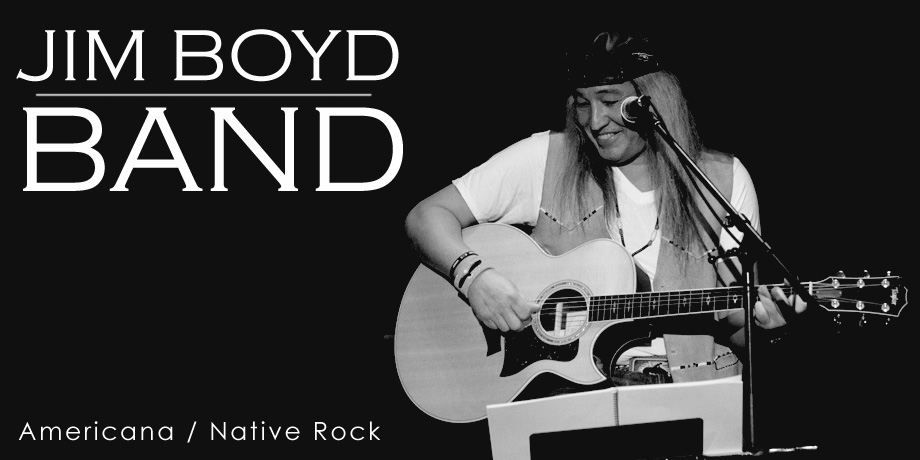 Rest In Peace Brother Jim, Your Music Lives On

Jim was born at Edwards Air Force Base in California in 1956, and would rotate living on air force bases and the Colville Indian Reservation throughout his childhood. His father, Louis Boyd, was in the Air Force for twenty years. Jim had two brothers and three sisters growing up, and his older brother Lanny played guitar before Jim, in fact, Jim recalled sneaking his older brother’s guitar out from under his bed when he was gone, and that’s how he learned to play. Boyd’s mother Violet, spent time as a leader on the Colville Business Council.

Jim Boyd’s music career has spanned for over four decades as a musician, performer, songwriter, and producer. He is the consultant, owner and operator of Thunderwolf Records/Productions, and holds many Board positions, including Board member for the Colville Tribal Solutions Corporation.

Jim Boyd played as a cover musician for many years, then at the age of 23, he was recruited as a guitar player in the group XIT, which was one of the few groups in Indian country to have success. They were a group led by Tom Bee who was signed to Motown. Boyd played for two years with XIT, and still plays performances here and there with the group. Boyd was also on the documentary about the group call “XIT: Without Reservation”, which was a live recording documentary at the Mystic Lake Casino at Prior Lake, Minnesota.

Boyd actually wanted to be a recording engineer, not a songwriter. He went through the Recording Workshop in Chillicothe, Ohio in the early 80’s. Boyd didn’t start writing his own songs seriously until the age of thirty, and his lyrics were not “commercial” or “mainstream” oriented, but more in the vein of what is now called Native American Contemporary, or lyrics about Native American issues placed to contemporary music. His music to date covers tradition, politics, Native American contemporary issues, and more recent main-stream releases. He now has Fourteen full-length releases on his own Thunderwolf Records label, and has re-mastered and re-released UNITY, which was first released in 1993.

In 1988 Boyd had just received an A.A.S. Degree in Commercial Music and Jazz Studies from Spokane Falls Community College and was playing in a cover band in Spokane called Don Larson and the Cynics. Don had some recording gear in his basement and Jim utilized this small studio to record some songs he had written. He wrote a couple of the songs after starting the album, but still ended up with only nine songs. These nine songs were to be Boyd’s first Native American release called Reservation Bound. This project was released on Canyon Records, and was the start of Jim Boyd as a singer/songwriter.

Boyd took a couple years before releasing another record. He received another Degree in Small Business Management, and also quit drinking during that time, which had become a problem in his life, and he began dealing with issues he hadn’t dealt with in the past. These were themes in his next recording, Unity, which was released in 1993 on Boyd’s newly formed Thunderwolf Records.

Boyd had four songs on the Miramax motion picture Smoke Signals, which were also included on the TVT Records sound track. He also recorded music for Warner Bros. books on tape, Indian Killer. Boyd’s First Come, Last Served was released in 1997 on Thunderwolf. A music magazine said it was a mix of folk, rock, blues, thoughtful lyrics with great guitar riffs and strong vocals heard throughout

In 2001, Boyd released AlterNatives, which received Record of the Year in the Native American Music Awards.

In 2002 and 2003 Boyd released consecutive live releases. The first was Live At The Met, which was recorded with just Jim and percussionist friend Alfonso Kolb. The next year Boyd released Kyo-t, LIVE, which was Jim’s four-piece band at that time. Both live recordings were performed live to packed houses.

In 2005, Boyd released what would be another Record of the Year. This release was called Going To The Stick Games, which was a tribute to a traditional game that is still played today. Boyd fused Stick Game songs with contemporary music in an Americana vein.

Next came Them Old Guitars in 2005, which was the release with the title song being a tribute to Boyd’s close friend and band mate Jerry Stensgar, who had passed away.

In 2006, Boyd released another live recording. It was called Live At Two Rivers, with the Jim Boyd Band. Two Rivers is the Spokane Tribe’s casino right off Lake Roosevelt. This was the recording that the songs Inchelium and Rebel Moon were on. Both of these songs were later released on a compilation recording on a Blues label in France. The label was called Dixie Frog Records, and the recording was called Rezervation Blues and More.

Blues To Bluegrass was the next release. It was released in 2007 and was called “a true Americana Gem.” Boyd received Artist of the Year in the Native American Music Awards for this release.

In 2010 Boyd recorded and released Voices From The Lakes, which was a more traditional release with cedar flutes, drums, and lyrics that were inspired by the history of the Arrow Lakes People.

Jim Boyd received the Lifetime Achievement Award at the Native American Music Awards at the 15th Annual commemoration at the Seneca Allegany Casino & Hotel in Salamanca, New York on November 14, 2014.

Boyd released a twelve-song cd titled HARLEY HIGH on his own Thunderwolf Records label in 2011. Harley High is a main-stream rock recording that portrays Boyd’s love for riding Harley-Davidsons. This release was recorded in Nashville at Quad Studios engineered by Grammy winner Bobby Bradley, and mixed at The Power Plant Studios in Hampton, Virginia.

Boyd’s music has also been included on many other compilation recordings such as the Honor CD with artists like Bonnie Raitt, The Indigo Girls, Matthew Sweet, Toad the Wet Sprocket, and others.

Jim Boyd met Jeff Probst(host of Survivor) in the 90’s at a Northwest music conference in Seattle. This resulted in Jim’s songs being included in a movie release Probst had produced called Trust Me. At one time Boyd was interested in becoming a music therapist and he recalls his gratitude for Jeff Probst sending him books on the subject.

Boyd continued to write and release music that won him many national awards, including two Record of the Year awards, Songwriter of the Year, Best Pop/Rock Recording, Best Short Form Video/DVD, and Artist of the Year.

Jim Boyd has performed for many years throughout the United States, Canada, and Europe. He’s performed at festivals like The New Orleans Jazz & Heritage Festival, Seattle’s Bumbershoot, venues like Hard Rock Hotels, The Sundance Film Festival, an appearance on CBS 60 Minutes, and many casinos and blues festivals.

Jim Boyd continues to write and produce projects. He tours as a solo artist and with his group.