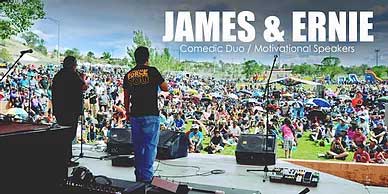 James Junes and Ernest David Tsosie III are sober, drug free performers, presenters and motivational speakers. Their sidesplitting humor includes musical antics and humor on Native American life and current affairs. The pair uses their own testimonies and personal experiences as their weapon against the use of drugs, alcohol and domestic violence and travel throughout Native America and Canada. Their comedy has been described as a “Healing medicine. Good for all people!”

James and Ernie were voted “Comedians of the Year” at the 2009 North American Indigenous Image Awards, an award that includes both the USA and Canadian talent. They have played and hosted two of Native America’s most popular entertainment events the Native American Music Awards and the American Indian Motion Picture Awards.

James and Ernie have headlined some of Native Americas première casinos and venues and even played at the world-renowned Kennedy Center in Washington, DC.

Both have also made their mark in the movies.

Every performance is packed with tear rolling humor, which serves as the vehicle to pass the important message at the end. All ages can relate on one level or another, making the show a treat for all to experience.

They are proud to be sober, drug-free, and abuse-free husbands, fathers, and Native American men!