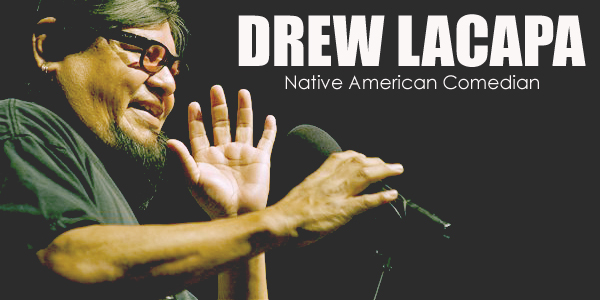 Drew is bustin’ loose by combining Native folk tales and contemporary humor with an Indian flair. The result is an eclectic vibrant vein of rich humor of the American Indian.

Andrew “Drew” Lacapa, is an Apache Hopi Tewa, who calls himself a lover and not a fighter. An accomplished, Native stand up comedian, he is a skilled master of ceremonies, a dedicated volunteer, a former service man in the U.S. Navy and most important a family man and grandpa. He believes his humor is not discriminatory in that everyone is worthy of being teased regardless of ethnicity or religion.

Drew has been an actor in Skinwalkers (2002), directed by Chris Eyre and Older Than America (2008) directed by Georgina Lighting.

His first CD entitled, “A One Night Stand in Paradise”, was created with longtime friend Knifewing Segura at the Paradise Casino on the Quechan Indian reservation in Yuma, AZ in 2000.

His DVD, “For Real” was recorded live at the Hon-Dah Resort and Casino, Pinetop, AZ on May 31, 2003 by (as the cover states) Real Live Professional Indians.

Drew is also an advocate for Diabetes Prevention and has hosted and performed at numerous diabetes wellness programs across the country. One of his recent projects was RezRobics—a workout video to extol the need for Native Americans to exercise and avoid health problems such as diabetes. Featuring Drew and Elaine Miles, the video is the brainchild of Pam Belgarde, a Turtle Mountain Chippewa health worker, and Gary Rhine, a producer/director. The exercise video won an award from the American Indian Film Institute.

Drew has broadened his stage act from hosting pageants and parades to performing stand-up comedy at casinos, schools and conventions throughout Indian country. “Every event is always exciting, whether it be a prestigious University or an event for children, they are all equally important.” His act personifies the hardships of Native people in this century. Drew’s physical antics complete with costumes create a unique and hilarious image of indigenous people in present America.

When asked what inspired him to become a stand-up comedian, Drew quipped, “Inspired me? Some guy asked me to talk. I was a starving student. My kids looked at me with puppy-dog eyes. I took the money, fell off the stage, never missed a beat. I’ve been doing it ever since.”

There are many stories to tell and many places to go. From pageants and pow-wows, to casinos and conventions, Lacapa’s laughter is Native medicine at its finest.