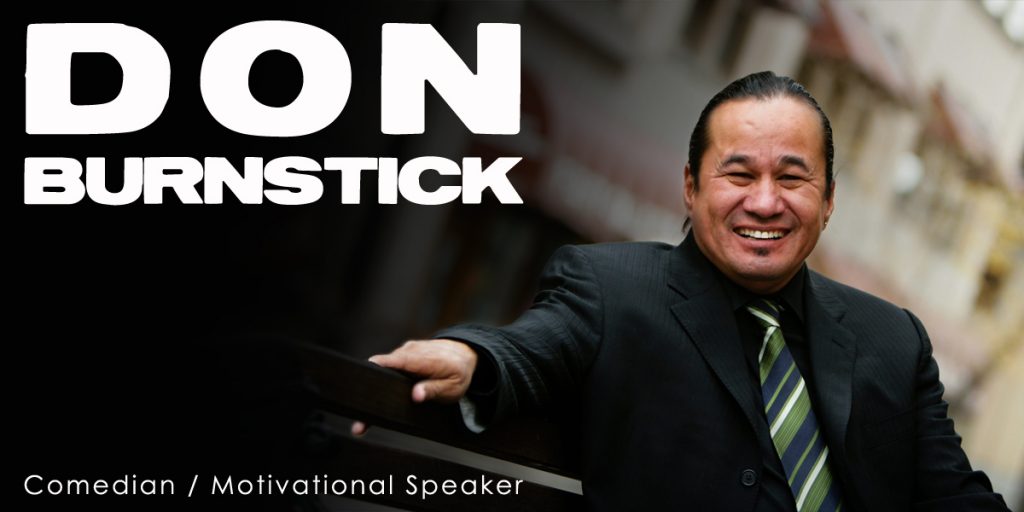 Don Burnstick is a Cree from the Alexander First Nation located outside of Edmonton, Alberta, Canada. The youngest of 15 children, coupled with the fact of growing up on the reserve, taught Don a variety of means of defending himself, not the least of which became his use of humor.

Don’s young life was very violent. “I lived on the streets of Edmonton as an alcoholic and drug addict. In 1985, when I sobered up at 21, there were not too many 21 year old males that were alcohol and drug free so I just started asking to go and tell my story.”

Burnstick obtained post-secondary training at the University of San Diego in holistic urban youth development. He also has obtained certification as an Alcohol and Drug Abuse Counselor and graduated from the Native Trainers Development program at the Nechi Institute in Edmonton.

Don has now been involved within the healing/personal wellness movement for the past 20 years and has utilized humor and performance to provide a holistic approach to healing. His message speaks to a proud heritage, the importance of healing through humor and his continuing desire to leave a better world for our future generations. Don wrote and individually performs the play “I Am Alcohol – Healing the Wounded Warrior”. In this play, without preaching or moralizing, Don presents a gripping dramatization of the addictive power of alcohol and drugs, and the connections to other destructive forces that have plagued the Aboriginal community.

In addition to his healing work, Don has established himself as one of Canada’s best comedian of all times. His highly acclaimed comedy show “You Might be a Redskin – Healing Through Native Humor”, is a comedic performance, that humorously portrays First Nations people, their habits, likes and dislikes.

In 1967, Buddy landed his first acting role on the TV series “Gentle Ben”.

Encouraged to perform his first ventriloquist act, he ordered a cowboy ventriloquist figure with a big nose and moustache who is now known as Wendell P. Snodgrasz. Quick to learn the many skills of puppetry, Buddy soon became a master puppeteer.

Buddy has appeared on CTV with Nelson Bird, APTN Buffalo Tracks talk show, TNN’s Nashville Now with Ralph Emery, Music City Tonight with Crook and Chase, did a commercial spot for Master Charge in Kansas and interviewed on several radio talk shows in many different cities around the globe.

Buddy performed with one of his characters in the movie “The Audition” for a PBS special.

In 1993, Buddy won two awards as a master puppeteer for filming one of his marionettes, Stumbling Bear. Stumbling Bear, the video won best short film at the Native American Film Awards in San Francisco, at the Wind and Glacier Voices II in Lincoln Center, NY, and was viewed at the Dreamspeakers Film Festival in Canada.

From 2003 to 2006, he was the lead ventriloquist for a project in countries such as Austria, Germany, England, Holland, Norway and France.

October 2009, Buddy received an award for his many years of contribution to the Japanese Ventriloquist Association.

Whether performing for 1 or 40,000 people, Buddy continues to blend his own Grassroots style of comedy, bringing it to all the door steps around the globe all while sharing the knowledge of his rich, American Indian heritage.