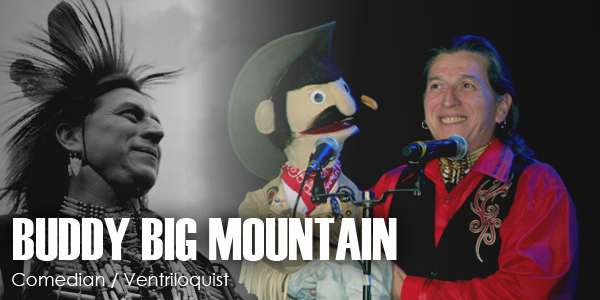 In 1967, Buddy landed his first acting role on the TV series “Gentle Ben”.

Encouraged to perform his first ventriloquist act, he ordered a cowboy ventriloquist figure with a big nose and moustache who is now known as Wendell P. Snodgrasz. Quick to learn the many skills of puppetry, Buddy soon became a master puppeteer.

Buddy has appeared on CTV with Nelson Bird, APTN Buffalo Tracks talk show, TNN’s Nashville Now with Ralph Emery, Music City Tonight with Crook and Chase, did a commercial spot for Master Charge in Kansas and interviewed on several radio talk shows in many different cities around the globe.

Buddy performed with one of his characters in the movie “The Audition” for a PBS special.

In 1993, Buddy won two awards as a master puppeteer for filming one of his marionettes, Stumbling Bear. Stumbling Bear, the video won best short film at the Native American Film Awards in San Francisco, at the Wind and Glacier Voices II in Lincoln Center, NY, and was viewed at the Dreamspeakers Film Festival in Canada.

From 2003 to 2006, he was the lead ventriloquist for a project in countries such as Austria, Germany, England, Holland, Norway and France.

October 2009, Buddy received an award for his many years of contribution to the Japanese Ventriloquist Association.

Whether performing for 1 or 40,000 people, Buddy continues to blend his own Grassroots style of comedy, bringing it to all the door steps around the globe all while sharing the knowledge of his rich, American Indian heritage.