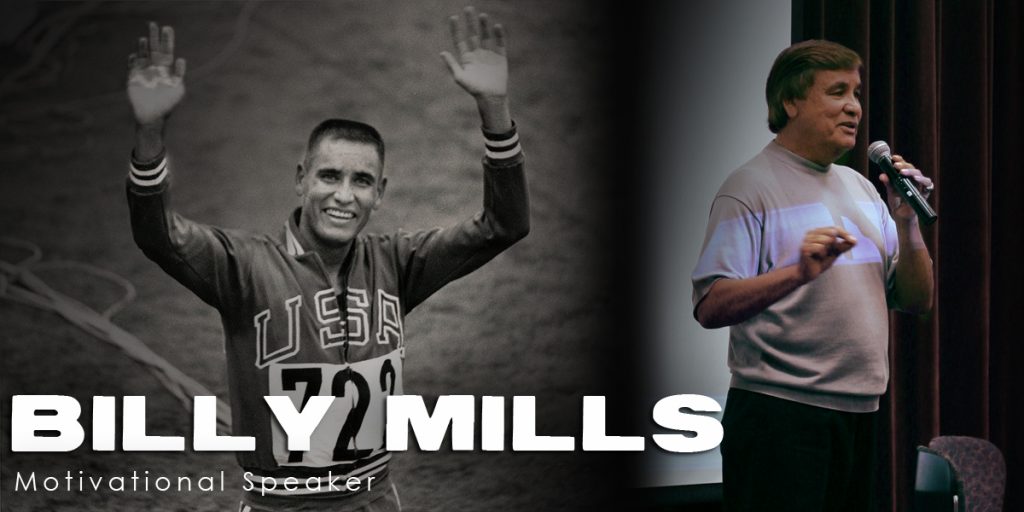 Billy Mills did this by utilizing a value based concept on how dreams come true. Billy was able to unleash the positive passion within himself for personal achievement in sports and in life. His feat of creating the greatest upset in Olympic history by winning the 10,000 meter run has matured into legend status today.

His value based concept on how dreams come true continues to inspire thousands of individuals around the world to reach within the depths of their capabilities and perform to the greatest of their potential. Billy understands just what choices it takes to become a champion, as depicted in the movie “Running Brave,” the uniquely uplifting story based on Billy’s extraordinary quest for excellence.

Following his desire for sports and the “High of Self-Competition”, Billy achieved his goals by becoming an accomplished businessman and speaker. Billy Mills is one of the most sought after Olympic Keynote Speakers on the platform. His dynamic presentations have empowered entire audiences through a wide spectrum of emotions: laughter, tears, enthusiastic applause, ultimately ending in a standing ovation.

He currently serves as President and CEO of the National Center For American Indian Enterprise Development. Before being appointed as President and CEO of the NCAIED, Mr. Davis served on the organization’s Board of Directors. He has served as Vice-President of Native Affairs for the Triple Five Group, owners of the world’s largest retail shopping malls; the Mall of America and the West Edmonton Mall and he previously served as co-chair of the National Indian Gaming Association’s, American Indian Business Network.

Though his company Litefoot Enterprises, Mr. Davis has facilitated an array of cross sector business opportunities in Indian Country ranging from acquisitions, casino gaming, hospitality, land development, green energy and pharmaceutical initiatives. Mr. Davis is a successful feature film actor and starred in such major motion pictures as, The Indian In The Cupboard and Mortal Kombat, Annihilation. He has also appeared on the television programs: C.S.I. Miami, Family Law and Any Day Now. Mr. Davis began realizing his entrepreneurial dreams twenty years ago.

His first business, the Red Vinyl Records recording label, began in 1991 and has since released dozens of award-winning albums distributed throughout the world. It continues to develop and record new Native American talent. The lyrics from Mr. Davis’ music are currently used today to teach both high school and college level students throughout the United States, and internationally, about historical and contemporary Native American issues and views.

Mr. Davis’ diverse entrepreneurial spirit has grown to include successful pursuits in the world of fashion through his popular “Native Style®” clothing line and in footwear through the development of his own branded line of sneakers- aptly named the Litefoot “FlexArrow®”, the Tribal Medicine Network, part of a strategic partnership with Wal-Mart to provide prescription medicines to Tribal Nations at deeply reduced pricing and the Litefoot Entertainment Group – a full service booking, merchandising and marketing company that specializes in expanding the reach of successful Native American public figures.

Mr. Davis recently self published his first book, “The Medicine of Prayer”; an inspirational and semi-autobiographical work that has sold thousands of copies in the United States and Canada. Philanthropically, in the last 7 years he has traveled over 150,000 miles throughout the United States bringing hope and empowerment to over 450 Native American communities as the spokesperson of the “Reach The Rez Tour” and also helped raise nearly $1.5 million to ensure the success of the effort. For over two decades, Mr. Davis has meshed his success as an entrepreneur, with his passion to better the future of Indian Country and served as a source of inspiration for thousands of Native people across North America.