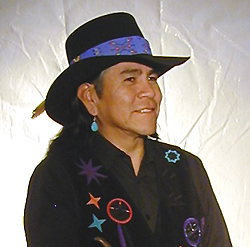 Allenroy Paquin is of the Jicarilla Apache and Zuni Tribes of New Mexico. He was raised in Albuquerque and learned beadwork and Plains Indian dance at a very early age. He is an accomplished silversmith. His father, a Zuni tribal member, taught him the art of Zuni jewelry making. He is also a flute player and has an album titled, “Just Playin’ Fancy”

Allenroy believes that art and dance are important to preserve his culture. His performance is exciting, educational and informative. He educates students and the general public on the history and differences of the Indian tries so he can abolish racial barriers and break down the stereotypes of Hollywood Indians. He sets an example for Native youth by living a drug and alcohol free lifestyle. His program includes; Northern and Southern Fancy dance, Pipe Dance, Lance and Shield Dance, Round Dance, Flute playing and Story Telling.

He was a performer with Tribal Jam in the 2002 Winter Olympics in Salt Lake City, Utah. Allenroy is a champion Fancy Dancer and competes in Powwows across the United States.